Preparing for the Next Pandemic – the important role of Civil Protection: A Regional View

Under the auspices of

Nicosia Risk Forum is an innovative event for the area of South-Eastern Europe, which brings together academic, industrial, governmental, policy, and other societal stakeholders with a significant interest in societal safety. Nicosia Risk Forum is organized under the auspices of HE the Minister of Foreign Affairs of the Republic of Cyprus Dr. Nikos Christodoulides.  Understandably, due to Co-Vid19 restrictions, #NRF2020 will take place virtually.

This year’s theme of #NRF2020 will focus on “Regional Collaboration in Societal Safety”.  The Covid-19 pandemic and its severe worldwide implications have proven once more that the inherent risks of our increasingly complex and interconnected world significantly challenge the implementation of fundamental societal functions. As disasters have always been and will always be part of our lives, the way societies respond to them is certainly of critical importance. However, preventing such disasters from occurring, preparing for their possible occurrence, and mitigating their potential effects, is a matter of life and death. In these testing times, higher-level initiatives faced challenges in delivering solutions.  Regional initiatives can provide support, much needed, at times of crises.  Traditional manmade and natural disasters will continue to occur, coupled with the risks brought-on by the pandemic; societal safety and national security become an absolute necessity and regional collaboration a supporting net.

Man-made and natural catastrophes know no borders and the aim of this year’s #NRF2020 is to be the catalyst for the creation of a regional network of governmental organizations, research groups, universities, and research organizations interested in promoting societal safety.

The Covid-19 pandemic and its severe worldwide implications have proven once more that the inherent risks of our increasingly complex and interconnected world significantly challenge the implementation of fundamental societal functions. As disasters have always been and will always be part of our lives, the way societies respond to them is certainly of critical importance. However, preventing such disasters from occurring, preparing for their possible occurrence, and mitigating their potential effects, is a matter of life and death.

The 2020 version of the Nicosia Risk Forum takes a radical position, summarized in the following statement: “the next pandemic WILL happen, sooner or later”. It is therefore now the right time to analyze the lessons learned from the handling of the Covid-19 pandemic, and use our experience to discuss the preparedness measures which should be implemented in order to mitigate risks and reduce the effects of the next pandemic. Furthermore, the Forum will not restrict this analysis and discussion to the case of Cyprus, but it will assume a Regional View, focusing on existing cooperation aspects and the need for the development of novel mechanisms that will facilitate the exchange of communication and good practices between the countries of the Eastern Mediterranean Region.

The Nicosia Risk Forum 2020 will host an impressive array of stakeholders who will offer their views on its main theme of the Forum.

First and foremost, we are honored to announce that Dr. Nikos Christodoulides, Minister of Foreign Affairs of the Republic of Cyprus, will deliver the closing Keynote Speech of the Forum on the topic of “Regional Collaboration in Societal Safety“.

CERIDES – Excellence in Innovation and Technology is a focal point for Security and Safety – related issues in South-Eastern Europe. CERIDES, during its short period of existence, has accumulated more than 4 (four) million Euros in competitive research funding. It is currently participating in various international and national research projects which are being funded through schemes such as Horizon 2020, DG ECHO, DG HOME, DG JUSTICE, ISF, Marie Curie Training Networks, ERASMUS+, as well as funding schemes of the Cyprus Research Promotion Foundation.

The 3rd ‘Nicosia Risk Forum’ will take place online on the 26th of November 2020. Full information and a detailed agenda of the event will follow soon. 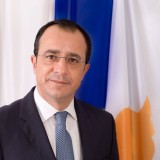 Minister of Foreign Affairs of the Republic of Cyprus

“The Nicosia Risk Forum 2020 provides the platform for an array of stakeholders –hailing from government, academia, and the private sector– to exchange views and experiences, making it a truly multi-disciplinary event that produces a high level of discourse at a timely juncture.

This well-structured forum becomes truly essential since it makes stakeholders consider why risk analysis is important, why it is, or should be, at the core of statecraft, and why political leadership must be in a position to assess the cost and benefit of their decisions before these are made. For all these reasons, the Ministry of Foreign Affairs actively supports the work of CERIDES and readily yields its auspices for this inspirational –and unique in nature– symposium.”

The timetable of the event is available here.

H.E. Mr. Nikos Christodoulides
Minister of Foreign Affairs of the Republic of Cyprus

Nikos Christodoulides was born on 6 December 1973 in Yeroskipou, Paphos.

He was a career diplomat between 1999 and 2013. During this time he served as Director of the Office of the Minister of Foreign Affairs, Spokesperson of the Cyprus Presidency of the Council of the EU in Brussels, Deputy Chief of Mission at the Embassy of Cyprus in Greece, Director of the Office of the Permanent Secretary of the Ministry of Foreign Affairs, and Consul General at the High Commission of the Republic of Cyprus in the United Kingdom.

Prior to his appointment as Minister of Foreign Affairs on 1 March 2018, he served as Director of the Diplomatic Office of the President of the Republic of Cyprus (2013-2018) and Government Spokesman (2014-2018).

He was a Lecturer and Research Associate at the Department of History and Archeology of the University of Cyprus between 2007 and 2010. He is the author of two books, Plans for Solution of the Cyprus Problem 1948-1978 (2009) and Relations between Athens and Nicosia and the Cyprus Problem, 1977-1988 (2013). He has also published extensively in domestic and international journals.

He is married to Philippa Karsera and has four daughters, Ioanna, Ekaterini, Despina-Maria, and Phoebe.

Nikos Chardalias was appointed Deputy Minister for Civil Protection and Crisis Management on 15th March of 2020, by the decision of the Prime Minister Kyriakos Mitsotakis.

He was born in 1968, in Athens, Greece. He studied Political Sciences and International Relations at Kent University (UK), specializing in Regional Development and European Integration. He served as Secretary-General for Civil Protection (19 July 2019 – 14 March 2020), was elected for three consecutive 4-year periods (2003-2014) Mayor of the Municipality of Byron, Attica Region, Greece. He was President of the Association for the Protection and Development of Ymittos Mountain, Attica Region (2003-2014), President of the Civil Protection Committee at the Central Union of Municipalities of Greece – KEDE (2006-2012), and Executive Secretary at the Region of Central Greece (2014-2016).

He speaks English and French.

Since 16 January 2020, Ms. Michou is the Director-General of the Directorate-General for European Civil Protection and Humanitarian Aid Operations of the European Commission.

Between March 2018 and January 2020, Ms. Michou was the Director-General of the Directorate-General for Migration and Home Affairs of the European Commission.

She joined the European Commission in 1995 and has worked in several Commission departments.

Between November 2015 and February 2018 she held the position of the Deputy Secretary-General in charge of coordinating the Commission’s work on migration and security as well as steering a number of other policy areas, such as the Digital Single Market, Transport and Mobility, and Institutional and Administrative Policies within the Commission.

Call for presentation of projects and technologies

#NRF2019 scientific brokerage part was a big success with over 35 EU and Nationally Funded projects in the wider area of Civil Protection presented and discussed. We would like to invite you to contribute this year as well. Please email the title of your project and a 250 word abstract to safety@euc.ac.cy by October the 28th, 15 minute presentation slots are provided.

You can find out more about which cookies we are using or switch them off in settings.

This website uses cookies so that we can provide you with the best user experience possible. Cookie information is stored in your browser and performs functions such as recognising you when you return to our website and helping our team to understand which sections of the website you find most interesting and useful.

Strictly Necessary Cookie should be enabled at all times so that we can save your preferences for cookie settings.

If you disable this cookie, we will not be able to save your preferences. This means that every time you visit this website you will need to enable or disable cookies again.

This website uses Google Analytics to collect anonymous information such as the number of visitors to the site, and the most popular pages.

Please enable Strictly Necessary Cookies first so that we can save your preferences!